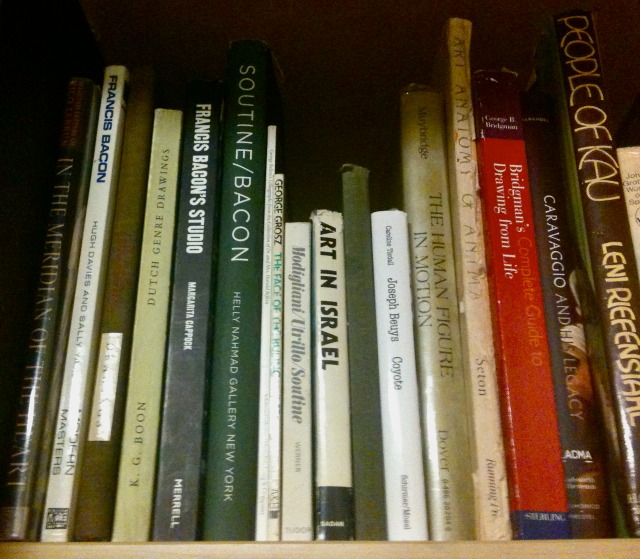 In my efforts to tidy up the studio, I ended up going through a lot of my artist books. Here are a few of my favorites.

What are yours? Feel free to comment with any books that have deeply inspired you.

From left to right:
– “Drawings for Dante’s Inferno by Rico Lebrun” (first edition 1963, and one of my most prized possessions, given to me by a very dear friend [not shown because it is huge and doesn’t fit in the shelf])
“In the Meridian of the Heart: Selected Letters of Rico Lebrun” (personal letters between Lebrun and his wife and other artists about art)
– “Modern Masters: Francis Bacon” (first book I ever bought on Bacon’s work)
– “Rico Lebrun: Drawings” (killer collection of his ink works)
– “Dutch Genre Drawings” (because let’s face it, they’re brilliant)
– “Francis Bacon’s Studio” (bought it in Dublin after actually seeing his studio – it’s a brilliant break-down of his influences and inspirations)
– “Soutine/Bacon” (Helly Nahmad Gallery’s catalogue for their “Soutine/Bacon” show, gifted and signed by the curator with up-close details of strokes. It’s a brilliant comparison of the two artists)
– “George Bellows: Lithographs from the Collection of Dr. and Mrs. Harold Rifkin” (because boxing)
– “George Grosz: The Face of the Ruling Class” (beautifully disturbing drawings/line work)
– “Modigliani/Utrillo/Soutine” (beautiful and portable)
– “Art in Israel” (found it at an old book shop, and fell in love with some of the work)
– “Francisco de Goya: The Disasters of War” (printed in 1937 – an old and tattered gem that I refer to often)
– “Joseph Beuys: Coyote” (bought in Berlin and written entirely in German because I couldn’t afford the English version, but the photographs say it all)
– “Muybridge: The Human Figure in Motion” (incredible collection of photographs of movement [esp. of wrestling])
– “Studies in the Art Anatomy of Animals” (best animal anatomy book I’ve ever seen)
– “Bridgman’s Complete Guide to Drawing from Life” (a classic and needs no introduction)
– “Caravaggio And His Legacy” (purchased from the recent LACMA show because I could not get enough of that chiaroscuro)
– “People of Kau” (photography book on an incredible Nuba tribe that I can not put down)

David Sylvester’s “Interviews with Francis Bacon, 1962-1979” will soon be added to the collection. It was one of the most influential reads I’ve ever had, and I think I must have checked it out of the library four or five times during my time in Ireland. Plus, one can never have too much Bacon.

Image | This entry was posted in Blog Posts and tagged artist books, can't get enough Bacon. Bookmark the permalink.
%d bloggers like this: